I attended most of the developer track presentations at Boston’s Wordcamp 2012. I learned about some interesting tools and techniques that I’d like to document for myself and others.

WordPress as a Web Framework by Sam Hotchkiss

Microdata for SEO by Dave Ross

Enterprise WordPress by Jake Goldman (1up)

Javascript hooks by Luke Gedeon (1up)

I have a SMF2 forum site, where the gallery is implemented through Gallery2 using Oldiesmann’s SMF + G2 Integration Project.

For 2 years, I’ve had the SMF and Gallery work properly together with linked member groups (a mod option), such that member groups auto-synchronized with ones in Gallery. At some point, either with a Gallery or SMF upgrade, users reported that the Gallery part of the site threw cryptic security warnings for non-admins. I explored the issue and figured users were missing in two required groups “Everybody” and “Registered Users”. I had reported it to Oldiesmann, but he claimed he had no control over those required groups and Gallery was self-managing them.

After about a year, I delved into the code and found that in order to sync the groups that a user had in SMF with the groups that a user had in Gallery, the integration code was removing all groups and adding the shared groups. This of course meant that the user was being removed from the required groups: “Everybody” and “Registered Users”. Users with privileged groups did not see the problem.

Here’s the fix that I’ve also submitted to Oldiesmann. But his forum complains when I added the code, so I had to create this post here. It says it does not allow external links (haha).

My fix will ensure that we do not remove the user from required groups and also add the users back into required groups (if necessary). Please note that the cleanup code is necessary because anyone who has ever visited the buggy gallery will have the groups removed, so there’s a lot of cleanup to do. The code provided below should auto-correct this issue.

I was updating Adobe Reader on a non-profit organization’s laptop and I found this gem: Adobe Updater tries to update it’s Adobe Reader software and complains that it cannot update because its own installer is holding necessary files hostage. Take a look: 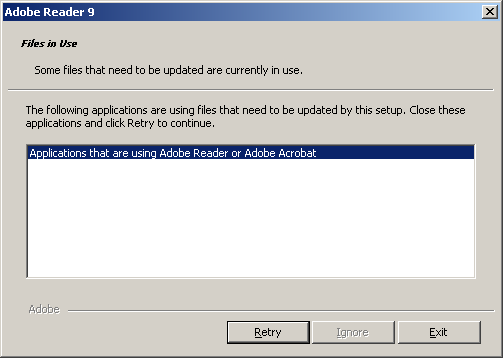